In between the last of the winter snows and the increasingly balmy days of Spring, I am a frenzy of activity – enjoying the season’s last ski days, March break with my kids and preparing to garden.  By early March, I am staging my seed packets of cold crops for planting, cleaning up the winter debris blowing around my yard and making the season’s first trips up to my community garden in downtown Denver.   St. Patrick’s Day approaches as the optimal plant date for peas and I often find myself shoveling aside snow and chiseling away at frozen earth to bury the precious seeds on or near that date.   This year, Colorado had an unexpectedly warm and dry March so my garden partner and I were able to turn our beds and slide the pea seeds in with ease – a welcome surprise!

On the home front, I planned to start seeds after taking a few years off.   In the past, I grew a ton of seedlings but found that transplanting them brought mixed results.   Was it really worth it?, I asked myself.  Generally, I find that direct sowing works best for most of my crops – greens, broccoli, cucumbers, pumpkins, basil, flowers, squashes, gourds, beans, etc.   But since I still have to purchase hot weather plants like tomatoes, peppers and eggplants, I thought about seeding them at home.   The only sticking points for me is the fact that these hot weather plants need special conditions to germinate; namely warm soil and more light.   Armed with a heat pad, a sunny window and packets of a dozen varieties of tomatoes and peppers, I decided to go for it.

So on March 24, I planted two trays of peppers and tomatoes; one with a heat mat and the

other without.  Most of the varieties I planted need to be started 6-10 weeks before transplanting into the garden when the soil temperatures rise above 60 degrees at night. No matter that the average last frost date is generally considered to be May 15 in Denver, I don’t ever put in my tender crops before May 22 or Memorial Day weekend.    And even then, I’ll use Walls of Water just to make sure.  I can tell you stories about getting the plants all in on May 20 and an ice storm arriving that night.   Better safe than sorry.   By March 29, the tomatoes on the heat mat had sprouted but none of the peppers in the cold tray.    Was the soil not warm enough to germinate or do the peppers take longer?   Just to be safe, I found an inexpensive heat mat at Walmart ($24.99) and set it up.   As of today, March 31, no peppers have sprouted.   We’ll see what happens this week.

After posting a photo of my seed trays on Facebook, my friend Maggie Leyes shared that she starts all her seeds in milk jugs and sets them outside.    She shared a link to a website with instructions which I promptly checked out:

I was surprised to find that even tender crops stay warm and toasty in the milk jugs (even when covered in snow) so I thought I’d give it a try.   Following directions, I cut the milk jugs almost in half leaving a 2 inch “hinge”, punched some drainage holes in the bottom, and added soil less potting mix.   I put two varieties of seeds in each “greenhouse”, taped the pieces back together, labeled the jugs, nestled them in a recycled lid and placed them outside in the rain and impending snow.  We’ll see what happens! 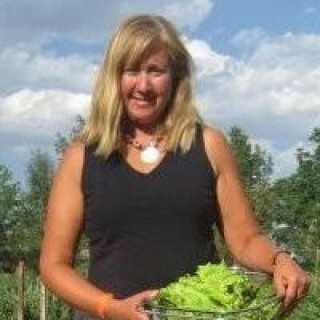 Hi, I am an avid gardener both at home and at Rosedale Community Garden where I've had a plot for 21 years. I am very interested in learning more about gardening, how to preserve it, incorporating farm fresh produce into my cooking and living a healthy lifestyle. In addition, I am a Master Community Gardener through Denver Urban Gardens and am a shareholder at the Chatfield CSA. In 2015, I spearheaded an effort to start a community donation garden at St. Philip's Lutheran Church -- a project I will share on my blog. I am eager to share what I've learned and the adventures I had learning new things and interacting with the garden community.